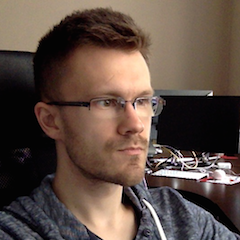 Distribution to multiple virtual machines in the cloud or servers is the way to scale horizontally when there is no more room or resources to grow vertically.

This real world example based intro will present how to load test an XMPP server and distribute load generation using Tsung. Some HTTP related bits might be thrown in.

- The tutorial aims to show from the ground up how to use Tsung to load test a distributed service and distribute load generation.

- Some caveats concerning XMPP testing with Tsung will also be covered as well as extending basic XML scenarios with custom Erlang functions.

Tutorial is available on github.

Radek has first encountered Erlang during his studies at AGH University of Science and Technology in Kraków. Having had interest in functional programming as well as exposure to Python, he developed a liking for Erlang for its mix of functional nature and dynamic typing somewhat reminiscent of what he knew from Python.

For some 3 years now he has been working at Erlang Solutions Kraków, focusing mostly on the development and consultancy on MongooseIM, the homegrown distribution of ejabberd XMPP server.

He’s also keen on operating system internals and sees a glimpse of hope that some (hundreds? thousands?) years into the future they won’t be written in C anymore.