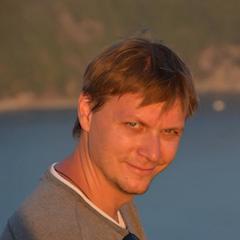 Communication and positioning protocols for underwater acoustic sensor networks are widely covered in the scientific papers during the last decade and partly implemented in a few proprietary and open-source networking frameworks, e.g. NS2 and NS3 based extensions. They allow combining different protocols in a stack running on acoustic modems/hardware and thus solving various tasks of practical interest. However, the usage of these frameworks still requires a skilled software engineer, while the learning curve of programming a network protocol in NS2 and NS3 is quite long.

This talk presents a novel framework for underwater acoustic sensor networks and positioning systems, designed as lightweight yet efficient and easily extensible tool. The framework core is compact and open source, implemented in Erlang. Evologics intelligent Networking Software Framework (EviNS Framework) follows a paradigm of event driven programming, each module explicitly defined in the form of a pushdown automata and is driven purely by events generated internally by event handles, by timers or externally by interface processors, converting raw data coming from external interfaces to events in form of tuples. This tuple can contain, for example, NMEA fields extracted from data stream received via TCP-socket or from embedded WebGUI. The task of the interface processor is to provide the mechanism to receive and parse this data, and pass it to the module, using this interface processor. The task of the module is to handle this event, update the state and pass back to the interface processor tuples, to be converted to the appropriate format and delivered via the appropriate interface. The framework has relatively moderate system requirements and can be run directly on the EvoLogics acoustic modemsÍ hardware or can be used with the DMACE a real-time emulator of EvoLogics underwater acoustic modems. The emulator provides a fully-featured emulation of the data-link layer and includes a simplified simulator of the physical layer that accounts for signal propagation delays, multipath propagation, data packet collisions, packet synchronization errors and bit errors with a user-defined bit error rate. EviNS along with the DMACE builds comprehensive set of tools for development, testing, deployment and operation of a great variety of communication and positioning solutions for underwater acoustic sensor networks (UASN). Open source modules supporting other acoustic modems can be added by the modem suppliers or keen developers.

The talk will explain the reasons for choosing Erlang and its implications on the framework features. The frameworks architecture will be presented with several implementation examples of known MAC protocols for UASN.

Present an interesting research field to the Erlang  community.

Oleksiy Kebkal is lead software engineer at EvoLogics GmbH, a German a high-tech enterprise, specializing in underwater acoustic communication, acoustic positioning equipment and innovative solutions for robotics. Oleksiy received his M.Sc. degree in Computer Sciences from the National Technical University of Ukraine (Kiev, Ukraine) in 2001 and is currently working towards his PhD degree. He held a research fellowship at the Technical University Berlin in 2002-2006 and joined EvoLogics GmbH in 2007. Oleksiy is the company's leading expert in communication protocol design and signal processing, having developed the media access algorithms of the EvoLogics D-MAC protocol.