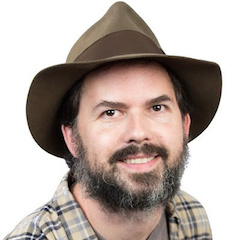 Functional programming is an old discipline, but a new story to most programmers. Over the last decade, publishers have added functional programming topics to their lists. Publishing on it still feels new and experimental, largely because it hasn't broken through with a giant best-seller.

Achieving popularity requires more than just writing great books (or giving great talks) on great programming languages. What's working? What hasn't yet found its fire? What can Erlang developers do to bring this great language to a larger audience?

- Attendees should come away with a better sense of the functional programming audience in general, and hopefully have better approaches to evangelizing the Erlang ecosystem in particular.

- Anyone who wants to see Erlang (or, say, a competing functional language) thrive.

Simon St.Laurent is an occasional programmer and full-time explainer. He's currently Chair of O'Reilly's Fluent conference and a past chair of OSCON, and directs O'Reilly's publishing and projects on Web development. A fan of the Erlang way, he's written "Introducing Elixir", "Introducing Erlang", "Learning Rails 3", and "XML: A Primer".