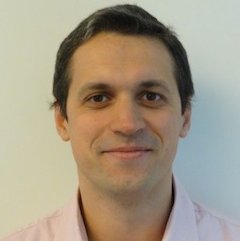 DRAKON is a visual language from the aero-space industry. It has unique features that improve understanding of complex algorithms. DRAKON gives a human-eye-friendly look to the solid functional core of Erlang. Together, these two battle-tested technologies strengthen each other.

- Give an overview of the DRAKON visual language.
- Show how to write an actual Erlang program using DRAKON Editor as an IDE.

Some basic knowledge of Erlang is enough. This talk could be interesting to developers in other functional languages.

Stepan has been writing and maintaining code since 2000. Currently, he is employed by a Norwegian company Visma Software International AS. His previous employers include CQG Inc. and Deutsche Bank. Stepan is also one of the authors and the project lead for DRAKON Editor.