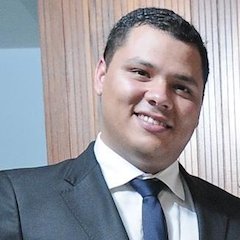 Having fun with Elixir: Functional Geometry Description of Escher's Fish


Having fun with Elixir: Functional Geometry Description of Escher's Fish

In 1982, Peter Henderson demonstrated that with the Functional Geometry was possible to describe images through algebra and how suitable is functional programming for this task.

For this presentation, I'll show that this algebra of pictures is sufficiently powerful to denote the structure of a well-known Escher woodcut, Square Limit as other did in the past, but this time, I'll do it with Elixir.

It's worth mentioning that others have shown that it is possible to directly execute denotations in other complex domains such as music, animation, and documents.

Function composition and high-order functions as combinators with Elixir.

Anybody who wants to know more about high-order functions and their benefits.

Milton's first work opportunity was in PDVSA, the state-owned Oil & Gas company in Venezuela, he worked there for 4 years, in a team that created an SCADA (Supervisory Control and Data Acquisition) that runs on Debian GNU/Linux. In the meantime, Milton also did some freelance work, mostly written Python/Perl code and doing some teaching of Free/Libre Open Source Technologies.

Then, in Mexico, Milton worked for the Pesqueria Steel Complex, among other things like team coordination, mostly doing desktop applications for QNX and Web Development.