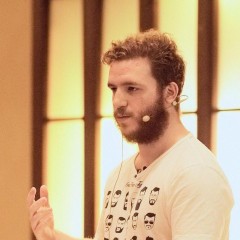 Stepping into a new era: injecting Elixir in a Ruby app


Stepping into a new era: injecting Elixir in a Ruby app

At our company, we are splitting a Rails monolith that takes care of everything in our backend into a few loosely coupled services. We're rewriting some of these services in Elixir: one of the parts of the monolith that we are planning on rewriting from Ruby to Elixir is the part that takes care of importing football data from our different data providers, process it, and store it. This is a fantastic use case for Elixir as the problem is naturally parallel and isolated. In the talk, we're gonna talk about this particular use case, about what Elixir shines at, and about the benefits and drawbacks of introducing it in an existing system.

Andrea is a programming enthusiast with a soft spot (very soft) for functional programming and beautiful code. He loves learning new stuff. He strongly believes in accessible culture and education and in open-source software. He's a member of the Elixir core team and uses Elixir almost exclusively at work.