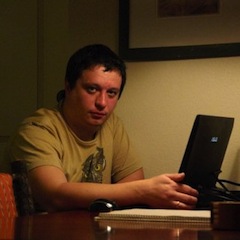 We converted a large Java media server into Erlang in the space of a few months. The system performs better and more reliably than the Java system with less staff and maintenance issues.

This presentation will describe a first experience with functional programming.   We replaced a large Java system of 35,000+ lines of code with an Erlang system of less than 4000 lines.   A particularly interesting feature of the new system is the C++ module responsible for DDoS defense tied to the Erlang with Google Protobufs.  We will survey the key points of the Erlang system with particular emphasis on the DDoS module.

Anyone interested in real world examples of successful Erlang implementations.

Alex currently serves as Senior Director Server Architecture for AVM Software, New York-based software development team which happens to manage one of the largest video chat communities in the world. Born in the USSR and raised in Siberia, he started his career in high-load server development more than 14 years ago working for Camfrog Video Chat, Texas-based video chat company since the very beginning. His main specialities are distributed systems, realtime multimedia streaming and DOS/DDOS protection on a large scale of our products all across the company.