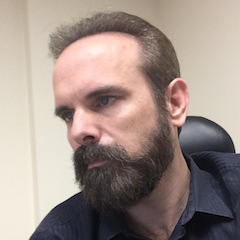 We converted a large Java media server into Erlang in the space of a few months. The system performs better and more reliably than the Java system with less staff and maintenance issues.

This presentation will describe a first experience with functional programming.   We replaced a large Java system of 35,000+ lines of code with an Erlang system of less than 4000 lines.   A particularly interesting feature of the new system is the C++ module responsible for DDoS defense tied to the Erlang with Google Protobufs.  We will survey the key points of the Erlang system with particular emphasis on the DDoS module.

Anyone interested in real world examples of successful Erlang implementations.

Perry is currently CTO of A.V.M. Software, Inc., makers of multimedia chat software. He has covered a lot of ground over the years as an actuary, engineer in the oil fields of Alaska, Wall Street Java programmer, classical pianist, and serious amateur astronomer. While having spent the majority of his working life in the quagmires of imperative languages, his most recent excursion in 2015 included rewriting an old Java media server in Erlang.