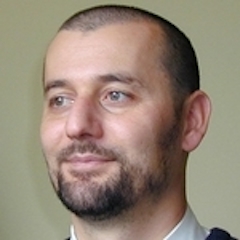 Erlang has a reputation for making it easy to write highly-available, parallel and distributed systems.

One of the gems in its standard library  -- the Erlang/OTP framework -- however is not very well known even among Erlang programmers. This is a shame since a lot of hard-gained operational experience and excellence was codified in the OTP framework and the code is rock-solid.

- separation of concerns: focus on the problem at hand and leverage the OTP framework for hard operational issues

This talk will be hands-on and introduce the following concepts:

through examples and code fragments.

Muharem Hrnjadovic (@al_maisan) is as a senior engineer with Rackspace International in Zurich and hacks mainly in Python. His general area of interest is the construction of industrial strength software systems. He dabbles in functional programming, messaging and newfangled data stores when left to his own devices.