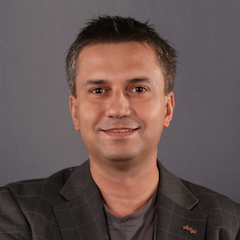 Keynote: An Introduction to Erlang - From behind the Trenches


Keynote: An Introduction to Erlang - From behind the Trenches

Erlang is a programming language designed for the Internet Age, although it pre-dates the Web. It is a language designed for multi-core computers, although it pre-dates them too. It is a “beacon language”, to quote Haskell guru Simon Peyton-Jones, in that it more clearly than any other language demonstrates the benefits of concurrency-oriented programming. In this talk, I will introduce Erlang from behind the trenches. By introducing the major language constructs, describe their benefits and discuss the problems Erlang is ideal to solve. I will be doing so from a personal prospective, with anecdotes from my time as an intern at the Ericsson computer science lab at a time when the language was being heavily influenced and later when working on the OTP R1 release.