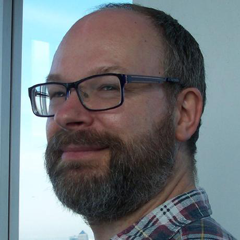 Erlang-Lua: How to write an Erlang C Node


Erlang-Lua: How to write an Erlang C Node

It is quite straightforward to integrate Erlang with other technologies, several mechanisms exist: NIF, linked-in drivers, port programs, C and Java Nodes.
This presentation will outline how you can combine the port program and C Node mechanisms to provide a coupling between Erlang and the Lua programming language. The following details will be covered (albeit briefly): starting and stopping the integration, message marshaling, error handling, communication difficulties.

Robby is a polyglot programmer who has been building systems for almost 20 years. For the past 9 years, he's developed systems using mostly Erlang. He's always happy to talk about API design and concurrency.

After working with a compiler company in the heart of Edinburgh, he's moved around the corner (literally) a couple of times, working on behavioural modelling (you know, the code that evaluates the data collected by your loyalty cards) and bringing diverse software systems to talk to each other (aka, more boringly, EAI). About a year and a half ago, he joined Erlang Solutions in London as a Senior Developer.