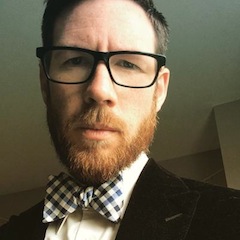 Tipping the Webscale with XMPP and WebSockets


Tipping the Webscale with XMPP and WebSockets

XMPP has been grossly over-shadowed by HTTP long enough. With the advancement of WebSockets in today's modern browsers, it's time we utilize XMPP to its fullest potential.

Together, we'll discover the fundamentals of the XMPP protocol and learn how to build distributed, scalable, and fault-tolerant systems by leveraging what's already baked-in.

The goal of this talk is to inspire people to explore the endless array of applications that can be built with XMPP and WebSockets. Attendees will learn the fundamentals of the XMPP protocol, and learn about some of the tools available in the Erlang/Elixir community.

* Developers who are interested in exploring alternative ways to build scalable [web] applications.

Sonny Scroggin is a software craftsman with broad interests in the world of computing. He is a core team member of the Phoenix Framework and is working on various libraries within the Elixir ecosystem. You can find him presenting or teaching others about Elixir, Phoenix, and other tools and libraries in the local user groups in Nashville, TN.