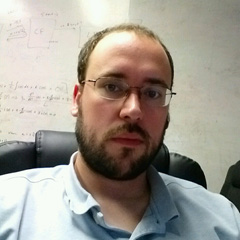 Erlang and Elixir are great and robots are neat, so we'll start off with a survey of robotics in erlang/elixir and then dive into some specific, fun projects such as:

Just show off some fun stuff you can do using Erlang distribution within the field of robotics or electronics, as well as encourage people to play with software outside of its traditional realms.

Anyone interested in making Erlang or Elixir talk to electronics, or just seeing some fun ideas for making erlang and android interoperate.

Josh is the CTO of Isotope11, a successful software development company that focuses on Ruby and JavaScript. He is also responsible for http://www.elixirsips.com, a screencast series wherein he walks through elixir as he learns it, and records 2 shortish (5-12 minutes, occasionally longer) videos per week. He's also been a co-author and a technical reviewer for multiple books on the Arduino microprocessor, and has had a lot of fun doing robotics with Ruby as well. Josh is currently aiming to bring that robotics fun to Erlang (or Elixir).