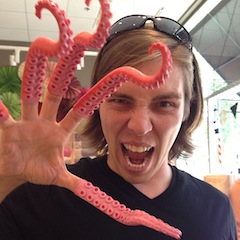 Erlang and Elixir are great and robots are neat, so we'll start off with a survey of robotics in erlang/elixir and then dive into some specific, fun projects such as:

Just show off some fun stuff you can do using Erlang distribution within the field of robotics or electronics, as well as encourage people to play with software outside of its traditional realms.

Anyone interested in making Erlang or Elixir talk to electronics, or just seeing some fun ideas for making erlang and android interoperate.

Robby Clements is a software developer for Isotope11. His primary language has been Ruby for the past five years, but he's been branching out into Erlang recently and finding it fascinating.