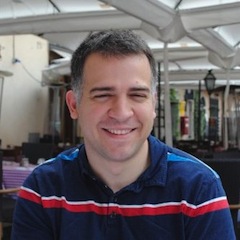 is an open source tool developed to fill the specific problem of helping non-Erlang developers or architects in reviewing finite state machines developed in Erlang OTP.  The tool converts gen_fsm modules into a generic graphical form to be used as an alternative to reading Erlang code.

The goal of this talk is to present our experiences of modeling Erlang FSMs in Motorola Solutions and the problems it presented which lead to the development of . We hope introducing to the general Erlang community will spark interest in the tool, and/or in modeling Erlang code and receiving feedback which can be used as input to the next phase of development.

Erlang OTP developers who develop complex gen_fsm machines and would like the ability to review such machine development with customers, architects or anyone who cannot read Erlang OTP code.

Nicholas has been working with Erlang OTP since 2004 where he was directly responsible for evaluating, introducing, and developing the first Erlang product inside of Motorola Solutions. Now as a Software Architect, Nicholas continues to work on products developed in Erlang OTP inside of the company. Nicholas is an expatriate American living in Copenhagen with his wife and two kids.